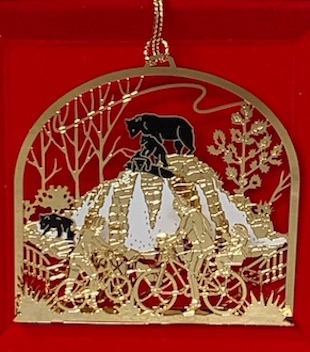 This ornament honors the BEAR FOUNTAIN.

The ornament celebrates the 10th anniversary of the beautiful "Bear Fountain" entitled "Bruins Riverpark Picnic" located on the River Parks Trail in BOK Plaza on 71st and Riverside. A gift to the citizens of Tulsa and funded by BOK and NatureWorks, it honors Tulsa World publisher Robert E. Lorton.

The backpiece shows the large sculpture and fountain unit: a black bear and three cubs, beautifully sculpted by wildlife artist Jim Gilmore. Mother and two cubs forage and play atop the rock structure from which several waterfalls cascade down into a pool. One cub is in front at the pool's edge below the waterfalls.

The frontpiece shows a paved terrace, benches and landscaping. A family on bicycles are shown stopping to admire the sculpture and waterfall.