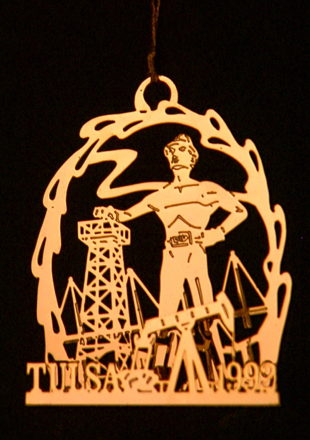 Towering 76 feet tall and weighing 43,000 pounds, he stands before the main entrance to the Expo Center. His right hand rests on an authentic oil derrick from Seminole, Oklahoma.

First introduced in 1953 for the International Petroleum Exposition and then displayed again in 1959, the Driller became so popular that he was renovated and permanently installed at the 21st Street and Pittsburg Avenue site. His final refurbishing and coat of gold paint (he's made of plaster and concrete over an angle-iron base) was in 1979.