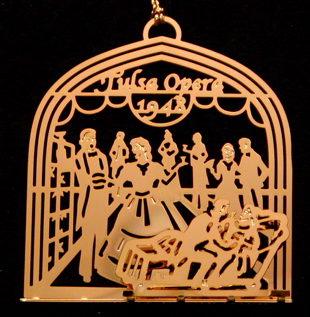 Founded as "Tulsa Opera Club" by Beryl Bliss, Bess Gowans, Mary Helen Markham and Ralph & Ione Sassano, it has grown into one of the top 10 regional operas and the 18th oldest opera company in the nation.

The back piece shows a lavish party at Violetta's Paris salon where she meets her future lover, Alfredo Germont.

The ornament's frame depicts the tudor-style doors of Central High School where the opera was performed. (Tulsa Opera moved to several venues before arriving at the Performing Arts Center in 1977.)

The front piece shows Alfredo kneeling at the foot of the terminally ill Violetta in the last scene as they sing their final duets.