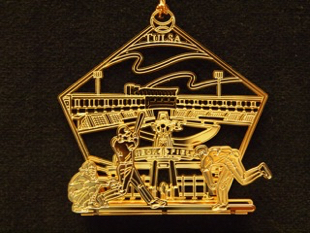 The backpiece, framed in a baseball diamond, shows the new ballpark, ONEOK Field, completed in 2010. The view looks north onto the playing field, dugouts, stands, and party suites from the right field picnic area.

The frontpiece depicts the fast action of three ballplayers at practice before a big game. In the center, the iconic Southwest Gate rises resembling an old-time 30' tall oil derrick.

Tulsa's first professional baseball team began playing locally in 1905 - over 100 ears ago. Our Drillers team then came to Tulsa in 1977. Since 1981, they played at Drillers Stadium until moving to their new downtown home in the historic Greenwood district.