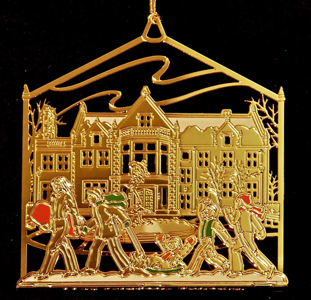 The 2011 ornament celebrates the Harweldon Mansion built in the 1926 by the Earl Palmer Harwell family.

The ornament depicts the front view of Harwelden in winter landscape, with slate roof, stained glass windows and stately entryway doors. Made of brick and carved Indiana limestone, it is the only home in Tulsa built in the Collegiate Gothic-English Tudor style.

The frontpiece shows colorful 'sledders' racing to Tulsa's traditional snow sledding destination on the hill at the back of Harwelden.

The Harwell family is known for their many generous donations to our city, including Mary Harwell's gift of Harwelden, upon her death, to The Arts & Humanities Council of Tulsa.The Council iself is a leading promoter of numerous art and educational programs throughout Tulsa - such as "Artists in the Schools".