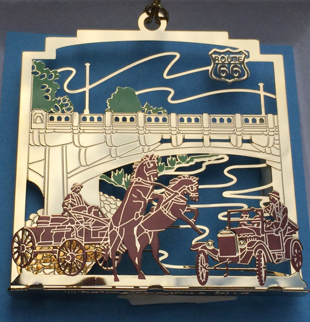 It was the first auto route across the Arkansas river and first major multi-span concrete bridge in Oklahoma, replacing a wooden wagon bridge. In 1996, it was added to the National Register of Historic Places.

The back piece shows a close view of one of 18 graceful, concrete arches spanning the river. Art Deco details are shown in the guardrails and lights.