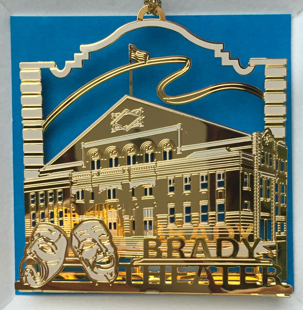 The 2017 ornament celebrates Brady Theatre, one of Tulsa's oldest landmarks, when built in 1914 as "Tulsa Convention Hall".

Light stone accents the red brick on front and sides, and the ornament's frame echoes the building's side detail.

The front piece features Greek comedy and tragedy masks, added during a major renovation in the '50s. Renamed Tulsa Municipal Theatre, it was a temporary home for Tulsa Opera and later Tulsa Ballet.

Bought by Peter Mayo in '78, major restorations were lovingly done and it opened in '79 as the "Old Lady of Brady" - and in '85, Brady Theatre!

Back in 1921, in the shameful days of Tulsa's Race Riot, it was used as a detention center. Thankfully, it quickly returned to being a place to bring the community together with great concerts, comics and musical events.